Snakes in an Engine Bay… It Does Happen [video] This video shows a truly frightening spectacle. A very annoyed looking anaconda had somehow found its way into a car’s engine bay – and had to be removed by some very brave emergency services personnel.

If you come from anywhere that has a lot of snakes you might have found yourself on a road littered with basking snakes and the eternal dilemma: do you keep rolling on or try to avoid them?

Here’s the thing, if you run over a snake there is a slim but real chance that it might get flicked up into the engine bay by the front wheels – so if you have to hit one, you always check your rear view mirror – or you hit the brakes hard and skid over the thing and in so doing cut it in half. It isn’t exactly PETA friendly but swerving to miss animals can result in the loss of human lives and if it is a choice between me and a snake – it is going to be the snake. 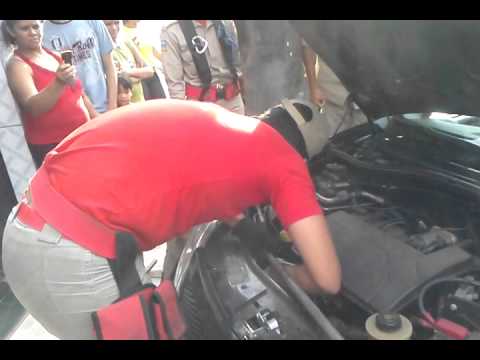 My uncle learned the whole skidding over snakes lesson while he was driving with his family in south-western Australia on a hot day many summers ago. He hit what looked to be a highly venomous eastern brown snake (most snakes in those parts are highly venomous). He checked the mirror and it was gone. He cautiously opened the hood and to his relief and horror he found it had been chopped up by the fan. [Geekosystem]