Captain Clayton Obson being taken to hospital after the emergency landing
by NJ Sullivan March 28, 2012 1374 Views

Captain Clayton Obson being taken to hospital after the emergency landing

Anyone afraid of flying should not read this post or at least remember this is a very rare occurrence. In fact, it seems to be the first of it’s kind in the US.

Veteran pilot, Captain Clayton Obson, was locked out of his cockpit by his co-pilot during a non-stop flight from New York to Las Vegas so an emergency landing could be made, after the captain had a breakdown of some sort. Emergency services were waiting for him upon arrival.

The FAA does confirm that the captain was locked out because of his strange behavior.

While the details of what went on in the cockpit are unknown at the time (the FBI is investigating and reviewing the recordings on the black box) what is assumed is that during the first two hours of flight, Obson began showing signs of instability and erratic behavior. It appears the co-pilot was able to convince the captain to leave the cockpit and immediately locked the door. However, he didn’t just lock the door. He changed the combination so Captain Obson couldn’t get back in. Then he immediately arranged an emergency landing and had emergency medical services called in to meet him.

What is definitely known, thanks to eye witness reports from passengers on the plane, is that Obson began pounding on the door of the cockpit and was speaking gibberish.  Storming up and down the aisles, ranting and showing signs of aggression, Obson was eventually tackled and held on the ground by six passengers until the landing was made.

Medical officials strapped him into a gurney and witnesses say the captain was still speaking gibberish as he was being taken away.

Yes, I am no doctor but this does seem like a full on breakdown of sorts. Considering pilots go under yearly examinations, we can only assume no one knew of the potential of this happening. And if they did, someone is going to definitely pay the price for it.

Captain Obson might also be charged by the FBI for the incident which would be the first time a pilot was ever charged. That, to me, seems a bit harsh considering it looks like he’s had a mental breakdown or someone spiked his coffee with something they shouldn’t.

So next time someone tells you pilots get paid tons of cash and aren’t under stress, remember this man who might have lost his mind in the sky.

And remember to thank your co-pilot for being there. [Source] 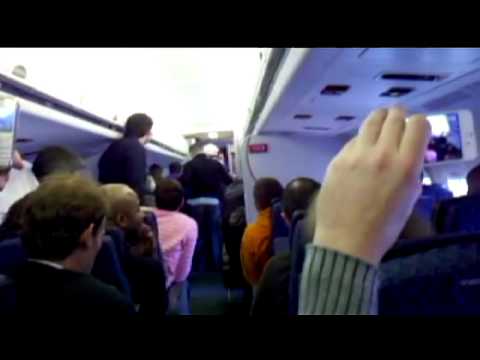