Kids by and large are pretty dumb and prone to randomly pushing buttons and whatnot because to them it’s fun, with no ramificiations whatsoever. Remember this next time your toddler or young child asks to play with your smartphone, because what happened to Paul Stoute could happen to you.

Stoute let his adorable 14-month-old daughter Sorella play with his smartphone, which didn’t seem like a problem at the time, until he received a message from eBay congratulating him on winning the $225 auction for a 1962 Austin Healey, nicknamed Frankensprite. Unbeknownst to Sorella his toddler had opened up the eBay app on his phone and purchased the classic fixer-upper.

“She decided to open the eBay app, and started clicking around and one thing led to another and we own a car,” he told KOIN 6 News, laughing.

Mom and Dad had an “initial panic,” he said. “‘What do we do? We can’t really afford it’ kind of thing.”

But they decided to keep it.

Not only are they keeping the vintage automobile, but Stoute plans on restoring the car himself, and who knows, maybe even give it to Sorella on her 16th birthday. Seems only fitting since she was the one who made the shrewd purchase in the first place. Not bad for someone who still wears diapers and can’t talk. 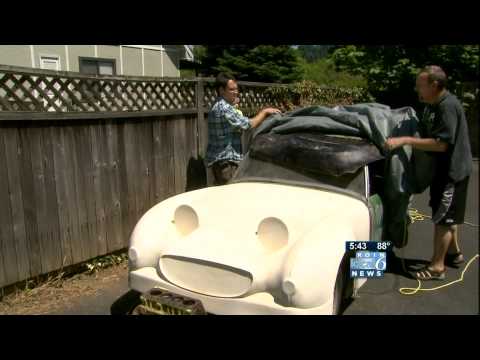 Man Scares Sleeping Girlfriend With Ghost Coming Out Of TV