It was a chilly New York night when British native Peter O’Donnell asked his girlfriend, Siobhan Byrne, to go for a walk in Central Park. The 31-year old told his sweetie, five years his junior, he wanted to see the John Lennon monument. Little did she know Petey boy had an ulterior motive and an damn adorable one at that.

Waiting for them was a flash mob of people waiting to dance to Bruno Mars’ hit “Marry Me.” It started, they danced, Peter joined in, Siobhan watched (probably asking herself what the hell he was doing – check out her face when he runs in a wee bit of head shaking takes place.) Then Peter runs forward and popped the question.

In a moment of vulnerability mixed with excitement, Peter rocks back and forth a little while he finds the words he’s most likely been practicing. Siobhan listens in equal parts amusement and shock. She obviously can’t believe this is happening. But it is and after she realizes it’s not a joke she tells him yes after he asks the question every proposal needs.

It’s a moment that will send a shiver down every romantic’s spine and bring a tear to their eye. For the rest of you it’s pretty cool to see how they’re all dancing together for this joyous moment.  To make it even better, the couple were in New York on vacation from Northern England – a surprise Peter planned for the two and thanks to the internet we all get to see it. Source. 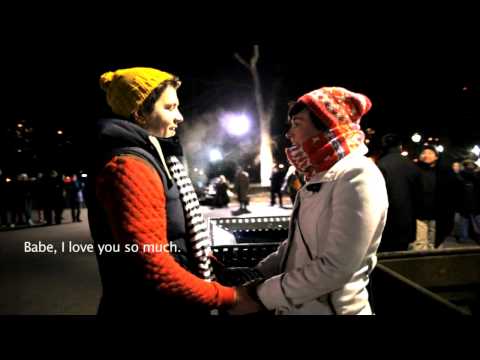 85-year old woman saves husband from moose with a shovel

Relationship hitman with dump your partner for you