playing the part of Spiderman is traffic cop Phan...

Nguyen Mahn Phan is one cop you always want on your side.

However, driver man didn’t want to get caught so he started to drive away. That’s not enough to stop traffic cop Phan. No sir!

Rather than jump off, Phan held on to the windshield wipers as the driver went down the road – and he didn’t go slowly.

After about a mile (or 2.2km roughly) the driver realized he had a cop that could super glue himself to a moving vehicle and decided to finally stop and he was arrested. Now the driver could be charged with interfering with a public official along with his other offenses.

Phan is unscathed by the incident and continues to be 0ne of the most dedicated cops in Vietnam. [Source] 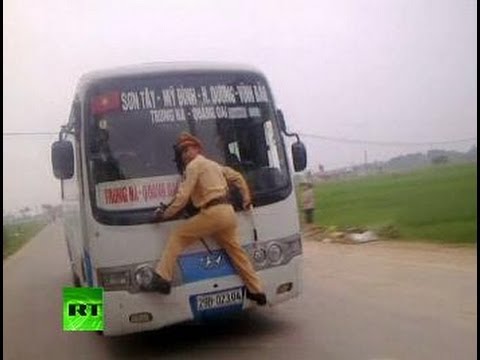