Weird and stupid records that probably shouldn’t exist… but do

We humans are a pretty creative lot when it comes to thinking up stupid ways to kill time. It is natural I suppose, but we are unique in the animal kingdom in our ability to turn them into really stupid competitions.

Fortunately, the good folks at the Guinness Book of World Records are there to keep everyone honest and to inspire plenty of otherwise normal people to strive for greatness in the most unusual of activities. Graham Barker’s collection of navel lint, or fluff, has been certified by the folks at Guinness as being the biggest in the world.

Barker explains how his collection, which now spans more than two decades, got started:

It was on the 17th of January 1984 that I found myself under-occupied in a youth hostel in Brisbane. The night was steamy and stormy – too wet outside and too hot inside to do very much, and my attention drifted to my belly button. There it was … fluff! I must have seen it before that night, but this occasion was the first time I ever picked it out and wondered about it. I became curious about how much navel fluff one person could generate (enough to stuff a cushion, maybe?), and the only way to find for sure was to collect it and see. My first piece of navel fluff was stored in an empty film canister, and the collection had begun.

What’s interesting is the way the lint changes in color over certain years. Barker explains the colors as being the average colors of the clothes worn at a certain time – so his wardrobe is clearly quite colorful.

Most watermelons obliterated with head… in a minute

This video tells us two things: this guy has a really hard head, and he is really good at smashing watermelons with it. Using only his skull, which may or may not have been thicker than normal, John Allwood smashed 40 of them, in a minute.

While 61mph might not sound very fast, hitting it on a conventional lawnmower is quite a feat. That is the speed that Tommy Passemante managed to take a conventional mower to on MTV’s Nitro Circus back in 2008. Air sickness bags have a lot going for them: they are free, they are waterproof, and they make a cool little souvenir as long as they’re unused. Since he started collecting them back in the 1970s Niek Vermeulen has amassed some 5,108 bags from 1,003 airlines – many of which may now be defunct. Most pans rolled in a minute (female) 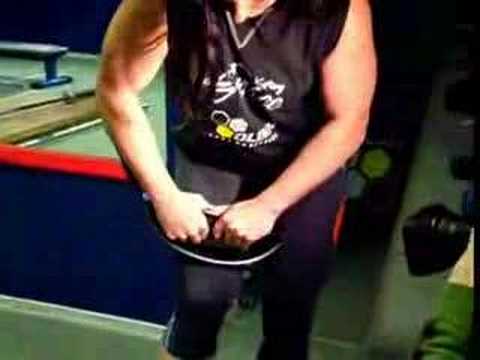 If you are not familiar with pan rolling, it is when you use sheer brute force to roll a perfectly good frying pan into a perfectly useless metal tube. Aneta Florczyk, who has other records to her name rolled five in 2008.

We have seen motorized furniture before, but what separates the “Casual Lofa” that you can see in the video below from the rest of the pack is the fact that it is street legal… and it can do 87mph.

This sofa is fully street legal! It has an MoT and Vehicle Licence and is powered by a mid-mounted, unleaded A-series Mini engine.
Along with the Leopard skin upholstery, the unusual features include a pizza pan (complete with pepperoni pizza) steering wheel, hand operated drinks-can brake ‘pedal’, a chocolate bar to select the 4 automatic gears and a knee throttle which facilitates a feet-up (or down)driving. 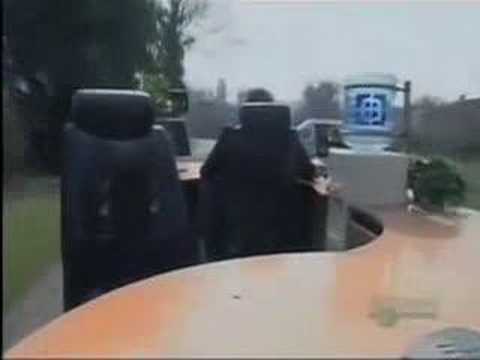 Most spoons balanced on face Fenella Allison had this to say after witnessing her son, nine-year-old Joe Allison, snatch the world record for facial spoon balancing:

I’m really, really proud of him because he can do something that no one else in the world can do. Apparently it’s always youngsters who beat the record because they have slightly greasier skin. It works even better if Joe’s sweaty but I don’t let him get away without washing.

With his ability to balance 16 spoons on his face, we are sure that young Joe is destined to accomplish tremendous things.

Honesty sculpture proves too much temptation for dishonest thief