After an incident-free competition, the closing ceremony of the World Deaf Futsal tournament was marred by violence when a middle-aged man was stabbed in the throat.

The man, aged 35-40 was found in the corridor of the sports hall in Örebro soon after the Iranian team was awarded their gold medals.

Staff members were standing and cleaning up when something happened in a corridor. What I know is that the police and an ambulance came after someone was stabbed in the throat.

A statement from police officer Jan Matérne threw little light on the situation:

What we can confirm at this point is that a person has been taken to the hospital. Right now we have more patrols in place to collect witness statements.

At this stage it seems that the injured man was a supporter of the Iran team and that no arrests have been made. The victim was treated in hospital and his injuries are said to not be serious.

Which brings us to the most important question of all: What on Earth is Futsal? Basically, it is a kind of indoor soccer/football played by two teams of five players on a fairly play area. Because the walls do not feature in the game, it can also be played outdoors. If that description doesn’t help, check out the video below. 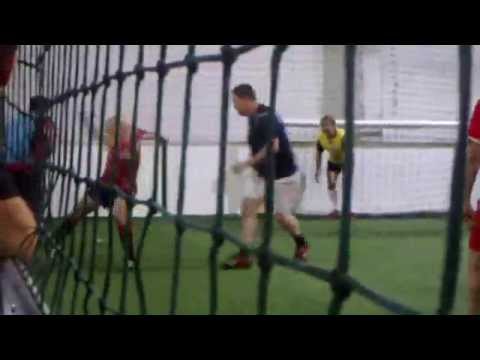