Pictured is Zlata Muck, host of the Croatian kid’s show School Hour, just moments before she passes out during taping of the show. In a bit of delicious irony, the show’s topic for the day was the importance of oxygen.

You can’t make this stuff up people.

Muck, it turns out, is three months pregnant. She was able to get out “Good Morning and welcome to ‘School Hour.’ In the first 35 minutes of today’s episode we are going to be talking about one of the most important elements in the world—oxygen!” Things go awry from there.

The host is able to spit out “without it, we…” before expertly demonstrating what happens when a person suffers from a lack of oxygen. Muck’s eyes roll upwards before she scarily stumbles backwards into some props and falls flat on her back, letting out a guttural moan as she lays splayed on the floor. She is quickly attended to by a staffer. 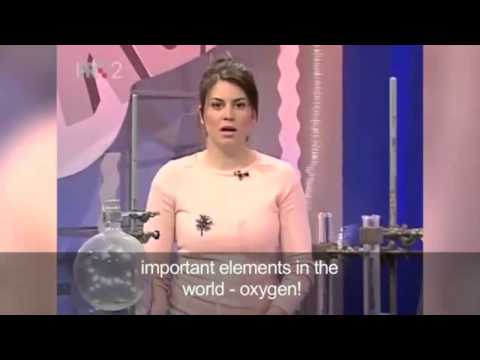 According to Yahoo Muck was rushed to hospital where she is reportedly doing just fine. School Hour edited out the fainting spell, which is a shame, because you couldn’t have asked for a better demonstration of the importance of oxygen than this.

Vulcan gets top vote for newly discovered moon of Pluto