It started last year when Kobayashi wasn’t allowed to compete in the Nathan’s Famous International Hot Dog Eating Contest at Coney Island in Brooklyn, N.Y. because he wouldn’t sign a contract restricting which contests he could enter. In protest, when Joey Jaws Chesnut was crowned he stormed the stage… and was arrested…

A year later and Kobayashi is still protesting. To show he is better than Joey Jaws Chesnut he staged his own 10 minute hot dog eating extravaganza on the roof of a nightclub in Manhattan. With fans watching he timed himself with the ESPN footage of Joey’s world record feat of eating 62 hot dogs in 10 minutes.

And beat the record he did. Kobyashi ate 69 hot dogs in 10 minutes and donned a tinfoil crown saying he is the world record holder.

If you want to see it yourself, check out the YouTube video below.

Who knew eating processed meat could be so … competitive.
It’s like more drama than the land of the perpetual hang over – Jersey Shore.

How do you train for these things anyway [Source] 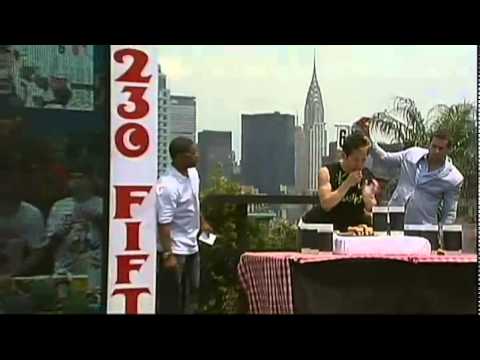 Another reason why dogs are better than cats, and sometimes humans