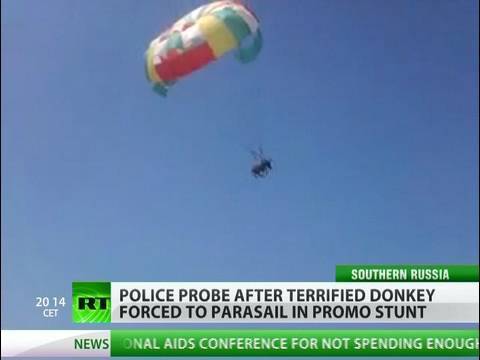 Last July, in what became possibly the worst publicity stunt in advertising history, a Russian para-sailing company, strapped Anapka, a 39 year old female donkey to a parachute, and forced it to sail over a southern Russia beach. Onlookers soon posted videos of the terrified wailing donkey on Youtube where the video went viral. Children at the beach burst into tears upon sight of the sad donkey. Naturally (and rightly so) celebrity animal rights activist Brigitte Bardot lodged a protest with Russian president Dmitry Medvedev.

The local police investigated the affair but sadly, in Russia, only killing or maiming an animal is against the law. Anapka was only dragged through water and returned safely to land.

It is unknown if the now 40 year old animal’s recent death by heart failure is related to its excursion. One thing though is certain, in Soviet Russia, para, sails you!

Woman beats off robbers . . . with a handbag